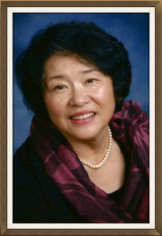 Susan Mukuno Ahlgrimm is a native Californian, born in San Jose. She attended San Jose State University, where she earned her Bachelor of Arts and Masters of Art degree in Vocal Performance. She then went on to earn a Masters of Art degree in Opera Performance at the State Conservatory for Music and the performing Arts in Stuttgart, Germany. She was a soloist at the State Opera in Stuttgart. Her opera roles include Susanna (Marriage of Figaro), Musetta (La Boheme), and Michaela (Carmen). She has done recitals in Europe, in Japan and here in the United States. Her love of pop and jazz finally became a reality for her as a singer 7 years ago when she performed in Oehringen, Germany at a Jazz Festival. Susan’s repertoire spans from opera, oratorio, classical songs to musicals and jazz.
Throughout her career as a singer, Susan had been a choir instructor as well as taught voice and choral music. She was an instructor at the Adult Education School in Oehringen, giving workshops and classes on gospel, classical song and pop.
She has also directed youth and adult musicals. Susan returned to California in March 2010 and continues to sing, train voices and conduct choirs..